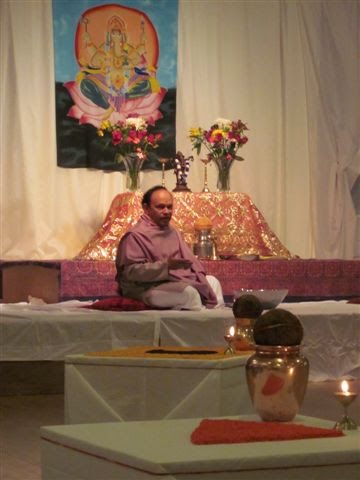 Pandit Dhruv Narain Sharma comes from an unbroken line of Brahmin Vedic Pandits belonging to the Vashistha gotra. He began learning the science of Vedic Recitation and Performance from his Grandfather beginning at the age of six.

Pandit Sharma earned his Acharya (Master’s) Degree in Veda at the early age of 18 from Sampurnanand Sanskrit University in Benares, India, and soon gained renown in the capital city of New Delhi for his knowledge as well as his skill in organizing large-scale Yagyas. He then became private priest to Indira Gandhi when she was Prime Minister of India.

He was brought to the United States by India’s Ambassador to the U.S., Dr. Karan Singh, a great Hindu philosopher, former King of Jammu Kashmir, and Federal Minister of India. Pandit Sharma has been in theU.S. for over 20 years.

He initially served as a full-time priest at the Hindu Temple of Greater Chicago in Lemont, Illinois and since 1995 he has provided Traditional Vedic Yagya and Puja services and Jyotish consultations independently throughout the United States. He has been a guest instructor at the University of Minnesota and the Scottsdale Museum of Art, and has acted as a consultant to a number of innovative projects involving art, landscape and ritual. Pandit Sharma serves on the Advisory Boards of numerous Temples and Institutions, including the Delhi Sanskrit Academy and the Kashi Vidwat Parishad in India and the Hindu Temples in Lemont, Illinois, St. Louis, Missouri; and Milwaukee, Wisconsin in the USA.

In addition to performing Yagyas and Pujas throughout the United States, Pandit Sharma also organizes large-scale Yagyas in India. For instance, in 1998 he organized the elaborate and rarely-performed Sahasra Chandi Yagya in New Delhi. He coordinated the efforts of 111 Vedic Pandits in reciting all 700 verses of the Durga Saptashati a total of 1,000 times over a period of five days.

Individuals who are new to the Vedic Tradition appreciate his openness and patience in explaining the meaning of the Yagyas.

Jyotishis and those interested in remedies for malefic astrological combinations appreciate his in-depth specialised knowledge of the many kinds of Graha Shanti and Nakshatra Shanti Yagyas.

Indians and other Hindus of all sects appreciate his depth of knowledge and mastery in performing Vedic Yagyas, Pujas and Homas of all varieties, and his fluency in many Indian languages.

Pandit Sharma is the founder of VedaVishwa, a non-profit organization dedicated to bringing the blessings of the Vedic Tradition to all who are interested. He welcomes the opportunity to serve all those who have a sincere desire to worship the Divine in its many manifestations. He is happy to discuss your needs and desires with you to determine which Yagyas would be most beneficial.

Please feel free to call him at the number below.